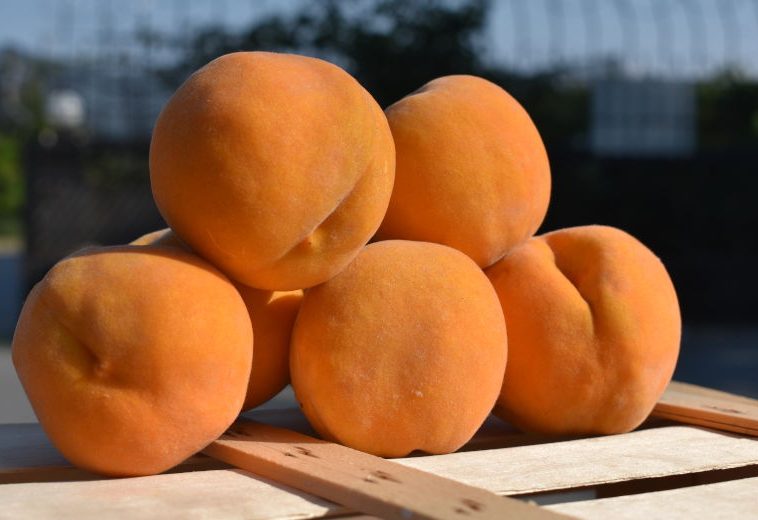 Our nursery in collaboration with French IPS developed a series of new industrial peach varieties in experimental orchards. These varieties have superior characteristics to classical varieties and are described below:

All varieties yielded more than 5 tonnes per acre. These yields refer to fruit that is industry-useful. Particularly efficient turned out the low-grade “Spanish Shrub” shapes, which, beyond increased performance, also cost less. The low hight of the trees significantly reduces labor costs for pruning, thinning and harvesting.

Large fruit size with high specific weight which exceeds the 120g . The shape is equable throughout the surface of the tree. The color of the fruit exterior is also equable. Their flesh is crisp with attractive orange color . Particularly enjoyable is the feeling while eating the compote due to the crispiness of the flesh.

A few days before full ripening period and for several days afterwards, the color of the fruit is yellow to dark yellow . Problems that have occured in the past with varieties that were harvested by producers, while were being “green” , will no longer be a problem for producers and industries. Also, the compote , as a final product has a very attractive presentation due to the intense yellow and orange color of these varieties.

4. The persistence of the fruit on the tree

The fruit of these varieties is highly resistant to the tree . They remain tough for a long time, allowing the producer to prolong the harvest and not be pressured by other factors, such as weather or availability of labor.

With a proper plant protection management program, disease problems such as Monilia, are not a headache for the producer. In the summer of 2018, although it was very rainy, we did not have  serious disease problems in these varieties.

The behavior of these varieties is very favorable to producers. They have rapid growth,which means that our orchard can easily be formed and ” close up ” the third-fourth year . It quickly gets into fruiting . Yields of around 3 tonnes per acre were observed only in the third life of the trees. So, the depreciation for the producer starts quickly and subsequently the profitability.

The ability to harvest , because of the physiological characteristics of the fruit, for these varieties can be done in 1 to 1.5 hands ,and this is an important advantage for the producer. Further, trouble free use of large transport means, such as Crate Boxes ( Bins ), further reduces the cost of harvesting . The combination of all these benefits has been estimated ΄for the producer to get rid of  2 to 3 cents per kilo .

Although at an early stage, it has been observed that in difficult crop years in terms of fruiting , these varieties remain highly productive . For example in 2017 in areas where Andros had a reduced fruit yield , Mirel had no problems and its production volume was hardly reduced at all.

9. Excellent quality for the processing industries

In addition to the benefits of these varieties to the producer, they are also attractive to the processing industries as they reduce their own production cost, while they are increasing the percentage of usable derived product.

Our varieties are copyrighted and are not free to reproduce. Their illegal planting, cultivation, trafficking and processing are punishable by criminal law and are punishable by severe penalties by the Greek Courts. Detection of illegal estates and products is very easy by the method of genetic match identification (DNA match ) whether it is plant tissue (leaves, branches, flowers, fruits) or processed product (compost).